No Place for an Angel

They travelled without speaking for a time, Lord Valbourg keeping his attention on the street, his expression remote, his eyes as dark as the night that surrounded them. Catherine took advantage of his distraction to study him. When she had first seen him walking towards her on the steps of Alderbury House, she had thought him older. But now, having spent time in his company, she realised he could not have been more than thirty, despite the fine lines that fanned out from the corners of his eyes—

‘Why haven’t you taken a lover?’

The question made her jump. ‘I beg your pardon?’

‘A lover. Forgive me if you find the word offensive, but I doubt the topic is one with which you’ve not had some experience.’

Catherine bristled. ‘If by experience you mean I have been approached about such things, you’re right. If, however, you refer to my having accepted such offers—’

‘I do not…because I know you have not. But let there be honesty between us, Miss Jones,’ Valbourg said. ‘You admit the subject has been raised in the past, in which case I hardly expect you to suffer a fit of maidenly outrage when I bring it up.’

No, she wasn’t likely to do that, Catherine acknowledged sadly. But the fact he felt free to talk to her about it told her exactly what he thought of her…and that did bother her. ‘I fail to understand why you would ask such a question, my lord. What possible interest can it be of yours?’

‘I should think what happened to you this evening would be a more than sufficient explanation.’

‘If you were under someone’s protection, you would not have been taken advantage of the way you were earlier.’

‘Ah, yes, of course,’ Catherine retorted. ‘Being someone’s mistress would entitle me to a greater degree of respect than what I currently enjoy.’

‘Come, Miss Jones, we both know being a gentleman’s mistress earns you no more respect than being an actress does,’ Valbourg said. ‘But it does come with certain advantages. For one, you would be better taken care of.’

‘Indeed. I would be given food and lodging in exchange for pleasures owed to my keeper whenever and wherever he chose to exact them,’ Catherine was stung into replying. ‘Forgive me if I do not find that preferable to the situation in which I currently find myself. Now if you don’t mind, I would rather not continue this conversation. As surprising as it may seem, I find it…degrading.’

Valbourg shook his head. ‘I do not find that surprising, Catherine. Nor was it my intention to offend you. I know you haven’t taken a lover and while I do not know what your circumstances were before you arrived in London, I doubt they were all that much different from what they are now.’

Catherine raised an eyebrow at the casual use of her first name. Did he think to disarm her with familiarity? ‘Why would you say that?’

‘Because the opportunities you have in London would be far superior to any you might have been offered in the country. If you were willing to become some shop-owner’s mistress, you would not hesitate to become the mistress of a much wealthier man here.’

The implication stung. Catherine turned her face away. ‘You flatter me, Lord Valbourg. Obviously, your opinion of me is very high.’

‘Actually, it is,’ he said, ignoring her sarcasm, ‘which is why it pains me to have to ask you the question at all.’

It was one of the strangest conversations Catherine had ever had. A gentleman, asking her why she hadn’t become some other man’s mistress but not because he seemed to have any interest in making her his own. ‘For what it’s worth, I do not choose to become anyone’s mistress,’ she said. ‘Singing is my passion and I am grateful to Mr Templeton for having given me the opportunity to do what I love night after night in his beautiful theatre. And to pay me for the privilege.’

‘But what of your future? There will come a time when the public tires of you or when the work becomes too demanding,’ Valbourg pointed out. ‘What will you do then? Retire? Move away? Marry?’

‘I shall never marry,’ Catherine said. ‘I have a career. One I love and that I intend to pursue. If I were to marry, all of that would change. A husband would not allow me to appear in public.’

‘He would if he were a fellow performer.’

‘It has been my experience that actors make very poor husbands.’

‘No. Experience gained from having watched those around me.’

‘So you are not hiding an abandoned husband in some remote country village,’ Valbourg said with a small smile.

Catherine did not return it. Not given the real truth hidden in her past. ‘I assure you, I am not.’

Thankfully, the carriage began to slow. Catherine turned her gaze towards the window, aware that they had arrived in a part of town she knew well but that was still a few streets from where she lived—which was exactly what she had intended when she had given Valbourg the false address. It would have been bad enough had Stubbs seen her arriving home in a nobleman’s carriage. It would have been disastrous had he seen the owner of the carriage sitting in the carriage with her.

‘I take it you are not going to tell me why you refuse to take a lover?’ Valbourg said, the question dragging Catherine back into the moment and causing her to sigh.

Why couldn’t he leave it alone? She had no desire to lie to him, but she could not…would not…tell him the truth. ‘Lord Valbourg, it would be impossible for you to understand what my life has been to this point. Or for me to predict how it will be in the future,’ she said instead. ‘What I can tell you is that events in my past dictate how my future will be lived and it doesn’t matter whether I like it or not. The past is the past. It cannot be changed. Now I really must go,’ she said. ‘It has been a long day and I am exhausted.’

Valbourg didn’t say a word. He simply looked at her in silence. But when she went to reach for the door handle, he leaned forward and held out his hand.

Confused, Catherine sat back. What was he doing? His expression, while serious, was in no way threatening, leading her to believe he wasn’t about to try to ravish her. So what did he want?

Her gaze rested on his a moment longer and then, with another sigh, she cautiously placed her hand into his.

Valbourg’s fingers closed around hers, warm and reassuring. ‘Thank you for agreeing to perform for my family and guests this evening, Miss Jones. While I regret the unfortunate incident that took place, I do not regret the time we were able to spend together. You are a beautiful and talented woman and I know you will do well in the future. But if you ever have need of my help, you have only to ask and it will be given.’

With that, he raised her hand to his lips and kissed it. 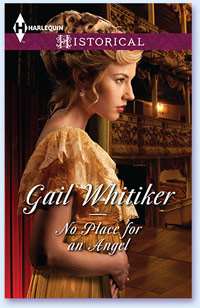