No Occupation for a Lady

It was Victoria’s habit to write early in the morning, usually long before the rest of the family were out of bed. Her mind was clearest at that time of day, and it was during those predawn hours that she did her best work. But when on the morning following the Holcombe’s soiree, the words did not flow freely Victoria did not immediately put it down to anything that had taken place at the soiree.

While it was true the memory of her conversation with Alistair Devlin had kept her awake long into the night, she couldn’t believe it was the reason she was feeling creatively stifled this morning. That kind of reaction usually came about as a result of her emotions being tied up in knots, and given that she and Alistair had spoken on only two prior occasions, the chance of having developed any kind of feelings for him was highly unlikely.

Yes, he was charming, and there was no question he was intelligent, but while those were qualities she would always admire in a man, Victoria wasn’t looking for them in Alistair Devlin. She shouldn’t even be thinking about the man. Her uncle had made it very plain that she would end up nursing a broken heart for her trouble because Alistair’s position in society, and his father’s antipathy towards the theatre, would always preclude them from having a relationship.

Then why did she keep thinking about him? And why, if he wasn’t interested in her, had he sought her out and spoken to her at the theatre?

That was the question plaguing Victoria as she trotted her mare along Rotten Row an hour later. She had given up on the idea of writing and had asked for her mare to be saddled and brought round, hoping that a change of scenery would be good for her. But even though her groom rode far enough behind so as not to disturb her concentration, her mind remained stubbornly and most disappointingly blank. No clever ideas leapt to mind, and while she was reluctant to put a name to the cause, Victoria had a sinking feeling it was all because of—

‘Miss Bretton,’ came an all too familiar voice. ‘What a surprise. I’d not thought to see you out so early in the day.’

Victoria looked up—and instinctively, her hands tightened on the reins. ‘Mr. Devlin.’ The last person she’d needed—or wanted—to see. ‘I cannot think why. I did not stay late at the Holcombe’s soiree.’

‘No, but most ladies do not care to ride in the Park at a time of day when society is not around to admire them.’

‘Ah, but I ride for pleasure. Not to be stared at by those who opinions matter not in the least.’

‘Yet, anyone who sees you cannot help but be impressed by your beauty.’

Unexpectedly, his boldness made her laugh. ‘It is a little early in the day for such excessive flattery, Mr. Devlin,’ she said, flicking a glance at the lady at his side, who wore a striking burgundy habit and riding a pretty dapple grey mare. ‘Are you not going to introduce me to your companion?’

‘But of course. Miss Victoria Bretton, may I present my cousin, Miss Isabelle Wright.’

‘How do you do, Miss Bretton,’ the lady said in a bright, youthful voice. ‘What a pleasure to finally meet you. I was introduced to your sister at the Roehampton’s reception a few weeks ago and thought her ever so nice. Your aunt and uncle were there as well.’

Not having been at the reception, Victoria assumed Miss Wright was referring to her mother’s brother and wife who lived in Edinburgh. ‘I wasn’t aware Aunt and Uncle Taitley were in London.’

‘Oh no, not that aunt and uncle. I meant the ones involved with the Gryphon Theatre. They are related to you, aren’t they?’ Miss Wright said. ‘Mr. and Mrs. Templeton?’

Astonished that a cousin of Alistair Devlin’s would be familiar with the owner of any theatre, let alone the Gryphon, Victoria said carefully, ‘Yes, they are.’

‘I thought so. I was terribly pleased to meet them. I truly believe your uncle stages some of the finest productions in London.’

‘Why don’t you tell Miss Bretton the name of your favourite play, Isabelle,’ Alistair said with a smile.

The girl laughed. ‘I don’t suppose it’s all that surprising. A Lady’s Choice, by Valentine Lawe. Cousin Alistair tells me you’ve seen it too, Miss Bretton.’

‘Did you not think it brilliant?’

‘Oh, but you must, because Valentine Lawe is the most talented playwright in all London. Surely we can agree on that?’

Somewhat nonplussed, Victoria took a moment to straighten her mare’s reins. How bizarre. She had never been asked a question about Valentine Lawe before, so really had no idea how to answer it. ‘I suppose I would have to say that he is—quite good.’

‘Quite good? My dear Miss Bretton, he is exceptional!’ Miss Wright exclaimed. ‘I’ve seen all of his plays, A Winter’s Escapade. Genevieve. Penelope’s Swain. But I think A Lady’s Choice is definitely his finest. Have you met him? Cousin Alistair said you must given that your uncle produces all of his plays.’

‘That would seem logical, but as it happens, Mr. Lawe tends to keep…a very low profile,’ Victoria said, sticking as close to the truth as possible. ‘My uncle says he’s never met a more reclusive playwright in his life.’

‘Is that so?’ Miss Wright’s face was, briefly, a study in disappointment. ‘I wonder why?’

‘Perhaps he is afraid of being mobbed in the streets,’ Alistair drawled. ‘By overly enthusiastic fans like you.’

To Victoria’s amusement, the girl actually blushed. ‘It isn’t nice of you to make fun of me, Cousin Alistair. I know you don’t think much of Mr. Lawe’s plays, or of anyone else’s for that matter—’

‘On the contrary, I think Lawe’s work is head and shoulders above everyone else’s. I may only have seen A Lady’s Choice, but based on that I am more than willing to acknowledge the man’s talent. Just because I don’t go to the theatre often doesn’t mean I can’t appreciate excellence when I see it.’

For a few heady moments, Victoria allowed herself the pleasure of basking in the warm glow of his praise. That was the worst part of not being able to acknowledge who she really was; being unable to express gratitude to people who enjoyed and appreciated her work. Especially a man like Alistair Devlin—

‘Valentine Lawe. Your aunt must have made some comment as to his appearance.’

‘Oh. Well, I’m really…not sure. I’ve never asked her what she thought of him…in that regard.’

‘I have a picture of him in my mind,’ Miss Wright admitted. ‘He’s as tall as Cousin Alistair and his hair is just as dark, but he has the most amazing blue eyes you’ve ever seen. When he looks at you, you feel as though he’s gazing right down into your soul.’

‘Really?’ Victoria hardly knew what to say. She’d never given a moment’s thought to her alter ego’s appearance. ‘How…interesting.’

‘And he’s brooding, just like a romantic hero should be,’ Miss Wright went on. ‘But as brilliant as he is on paper, he’s very quiet and withdrawn in person. And he dresses well, but only in black and white. And he wears a single red rose in his lapel and—’

‘A diamond stud in his ear?’ Alistair enquired. ‘Or a gold hoop?’

‘He is not a pirate, Cousin Alistair,’ Miss Wright said, rolling her eyes. ‘He is a playwright. And I’m not the only one who fantasizes about his appearance. Ellen Standish thinks he’s fair, Jenny Hartlett is convinced he has red hair, and Mrs. Johnston is of the opinion he hasn’t any hair at all. But she is partial to balding men so I suppose that is her idea of attractive.’

Victoria just stared, aware that the conversation was getting more bizarre by the minute. ‘Well, if I am ever fortunate enough to meet…Mr. Lawe I will be sure to communicate the details of his appearance to you.’

‘You would do that for me?’ the girl said, looking as though she had been given the secret to eternal youth.

‘Happily. But I should warn you that I have no expectation of seeing the gentleman any time soon.’

‘I don’t care!’ Miss Wright cried. ‘It is enough to know that when you do see him, you will tell me what he looks like and I shall know whether I have been right or wrong. Thank you so very much, Miss Bretton!’

Victoria inclined her head, grateful for having emerged unscathed from what could have been a very embarrassing situation. She didn’t like telling lies, but what was she to do with Alistair Devlin sitting right there? She could hardly admit to being Valentine Lawe now when she had not told him the truth during any of their previous conversations.

She glanced at him sitting relaxed and at ease in the saddle, and wished with all her heart that she might feel as calm. But her pulse was racing and when he smiled at her, it only grew worse; so much so that Victoria feared he must surely be able to see her heart beating beneath her jacket. Because his was a smile that was at once beguiling and disturbing. A smile that hinted at things she knew nothing about and had never experienced.

A smile that lingered far longer in her mind than it had any right to, and that would not be shaken, no matter how hard she tried. 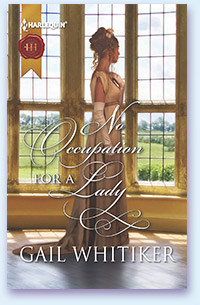