Excerpt from Chapter One

Because of her preoccupation with what lay ahead, it was a few minutes before Sophie realized that something was happening in the yard outside. An argument by the sounds of things, though the words were muffled by the thickness of the stone walls. Several of the inn's patrons glanced towards the door but none seemed inclined to move, reluctant perhaps to involve themselves in something that might have untimely consequences. But when the sharp retort of a pistol split the night air, followed by a woman's high pitched scream, Sophie knew the argument had turned deadly.

She turned to look for her brother-and felt her heart stop when she saw him running towards the door. 'Antoine!'

'Stay where you are, Sophie. I have to see if I can help.'

'No! If you would do anything, see to our rooms, then wait for me upstairs.'

For the space of a heart beat, Sophie hesitated. If someone was seriously injured, Antoine would need her by his side. It would be almost impossible for him to do what was necessary without an assistant or the proper equipment. 'Wait, I'm coming with you!'

She was half way to the door when a hand closed gently but firmly over her arm.

'The gentleman asked that you stay where you are,' a voice said close to her ear. 'I advise you to heed his request. You will only serve as a distraction if you venture outside now.'

The man's voice was as inflexible as his grip, but his highhanded assumption that Sophie would just be in the way rankled. 'You don't understand! Someone may have been injured.'

'I'm sure someone has, but your going out there now isn't going to help. If you promise to stay here, I shall endeavour to find out what has taken place.'

The man did not let go of her arm, and when Sophie finally raised her eyes to look at him, she realised he probably wasn't going to. He stood with legs firmly planted, radiating power and authority in a manner that suggested he was used to being in control. Clearly a man of means, he wore a well tailored jacket and light coloured breeches beneath his greatcoat, and though his leather boots were scuffed and in need of a polish, the quality of the workmanship was unmistakable. Dark brown hair fell across a broad forehead, over eyes bright with intelligence, and while his features were too rugged to be called handsome, he was still a very good looking man. All of which meant nothing given that he was still holding her captive against her will. 'Kindly release my arm, sir.'

'Have I your word you won't do anything foolish?'

'You think a desire to go to the aid of an injured person foolish?'

'I think the intention noble but the deed reckless.' Nevertheless, his hand dropped away. 'Your husband asked that you see to your accommodation. If you will wait for me at the bar, I shall offer what assistance I can and then return with any details I am able to uncover.'

But the man was already gone, his greatcoat billowing around him as he stepped into the night. 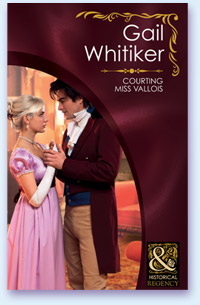