Barrington looked up from the deed of land he had been perusing, and saw the lady standing in his doorway. She looked like a breath of summer in a gown of pale yellow silk trimmed with deeper yellow ribbons, an elegant wide brimmed bonnet perched atop her golden hair. Her lips were a soft dusky rose, but her blue eyes appeared unusually bright against the pallor of her skin. She was distraught, and recognizing that, he rose at once. 'Lady Annabelle.'

'I hope my timing is not inconvenient, Sir Barrington.'

'Not at all. Pray come in. Bring your maid, if you wish.'

'No, I would rather speak to you privately.' Anna waved the girl into a chair outside his study. 'I cannot bear not knowing.'

So, it was curiosity that had compelled her to come. Obviously, she hadn't spoken to her father yet. Barrington indicated the high back chair in front of the fireplace. 'Won't you sit down?'

She did not. Visibly upset, she began to pace. Barrington understood the compulsion. He had been a pacer once himself. 'May I ring for tea?'

'Thank you.' This time, she did look at him. 'That would be most welcome.'

He glanced at Sam, who nodded and quietly withdrew.

For a moment Barrington said nothing, more interested in studying her than he was in initiating a conversation. She was as beautiful as ever, but this morning she looked to be drawn as tight as a finely strung bow. He had a feeling that if he pulled too hard, she would snap. 'What did you wish to ask me, Lady Annabelle?' he said softly.

Her head turned towards him, her blue eyes filled with misgivings. 'Have you seen my father this morning?'

'And? Did he speak to you about Peregrine?'

Barrington nodded, aware that he was far more in control of his emotions than she was of hers. 'Are you sure you won't sit down?'

'Please…just tell me,' she implored. 'I wanted to ask Peregrine myself but he wasn't in his room this morning and by the looks of his bed, he hadn't slept there at all.'

'I suspect he did not,' Barrington agreed. 'Lord Cambermere informed me that after his conversation with Mr. Rand last night, the young man left the house without any indication as to where he was going or when he might return. Apparently he was in a state of considerable distress.'

He saw her eyes briefly close. 'Did he admit to…what you accused him of?'

Barrington wished he could have said otherwise, but he wouldn't lie. Not even when he knew the boy had. 'No.'

With a soft cry, Lady Annabelle sank into a chair. 'I knew it! I knew he was innocent.' When Barrington made no response, she raised her head, her eyes narrowing at the expression on his face. 'You don't believe him.'

'It takes more than a man saying he didn't do something for me to believe him innocent when the evidence speaks so clearly to his guilt.'

Barrington gave a non-committal shrug. 'Why does anyone lie? To protect themselves or to protect someone else. I'm sure you've had dealings with young women who told you one thing yet did another.'

'Yes, because they had no wish for their misdemeanours to become public.'

'Exactly. Mr. Rand is likely embarrassed by what he's done and hopes to convince others that he is not at fault.'

He saw her stiffen. 'Peregrine has never lied to me.'

'Perhaps there has not been enough at stake for him to do so,' Barrington said quietly. 'Now there is.'

The door opened again and Sam walked in carrying a silver tea service. At a nod from his employer, he set the tray on the small table beside the desk and then quietly withdrew. Barrington crossed to the table and picked up the milk jug. 'Milk and sugar?'

He poured a drop into one of the cups, then filled both cups with hot tea. Accepting hers, Lady Annabelle said, 'I still think you're wrong, Sir Barrington. If Peregrine said he is not involved with Lady Yew, he is not. Why can you not accept that as truth?'

'Because the rest of his behaviour leads me to believe otherwise. How do you explain the fact that he chose not to stay home last night?'

'I suspect he was deeply embarrassed by my father's believing him capable of such reprehensible conduct,' Anna said simply. 'Would you not wish to avoid someone who had accused you of doing something you had not?'

'Maybe. But I also like to think I would be mature enough to admit my mistakes, if I were so foolish as to make them.'

'And I repeat, I do not believe Peregrine has made a mistake.'

He heard the quiet certainty in her voice and was moved to smile. He, too, had once been so trusting; so willing to believe in the goodness of others. When had he lost that naïveté?

'The attraction between a man and a woman is one of the most powerful forces on earth, Lady Annabelle,' he said. 'You have no idea how many crimes are committed, and how many lies are told, in the name of that attraction.'

'Not perhaps as well as you do,' Anna agreed, 'but we are talking about Peregrine's character and of that I believe I can speak with conviction. If he told my father he is not having an affair with Lady Yew, he is not.'

'Then it would seem we have reached an impasse,' Barrington said. 'There is nothing more to say.'

She looked somewhat taken aback by his easy acceptance of her statement, but equally willing to accept it at face value, she finished her tea and then set the china cup and saucer back on the table. 'What will you tell Lord Yew?'

'I don't know,' Barrington said honestly. 'But I have between now and two o'clock to figure it out.'

'Then I shall leave you to your deliberations.' She stood up and offered him her hand. 'Thank you for seeing me, Sir Barrington.'

'My pleasure.' Barrington felt the softness of the glove in his hand, the slenderness of the fingers within. 'I'm sorry that circumstances are such that you leave believing the worst of me. Again.'

'Actually, I don't. We each have our own ways of involving ourselves in other peoples' lives, Sir Barrington,' Lady Annabelle said. 'I tend to think the best and assume people innocent until proven guilty, whereas you believe the exact opposite.'

'Not at all. I simply strive to uncover the truth,' Barrington said. 'That is why people come to me. And experience has taught me that if the truth is not immediately discernible, it will come out in the end.'

'Then at least you and I are able to part knowing that the truth of this matter has already been established,' she replied. 'Goodbye, Sir Barrington.'

Barrington inclined his head but said nothing as she left the room. He stood by his desk until he heard the sound of the front door close before letting his head fall back and breathing a long, deep sigh.

So, the lovely Anna thought the matter closed. Wrong. Peregrine Rand was guilty. The fact he had chosen not to confess his sin meant absolutely nothing. In his heart, he knew what he'd done and if he was as noble as Lady Annabelle made him out to be, guilt would eat away at him until he had no choice but to make a clean breast of it. Either way, he was doomed to failure.

As it seemed was he, Barrington reflected, when it came to securing the good opinion of the lovely Lady Annabelle Durst. If it turned out that his accusations were correct and Rand was guilty of having an affair with Lady Yew, she would resent him for having proven her wrong. On the other hand, if Rand was telling the truth, she would resent him for having doubted his integrity in the first place. In short, they had reached a stalemate. And contrary to what either of them might wish to believe, in a situation like this, there was simply no way one or the other of them was going to win. 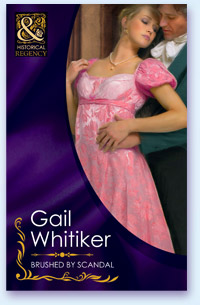